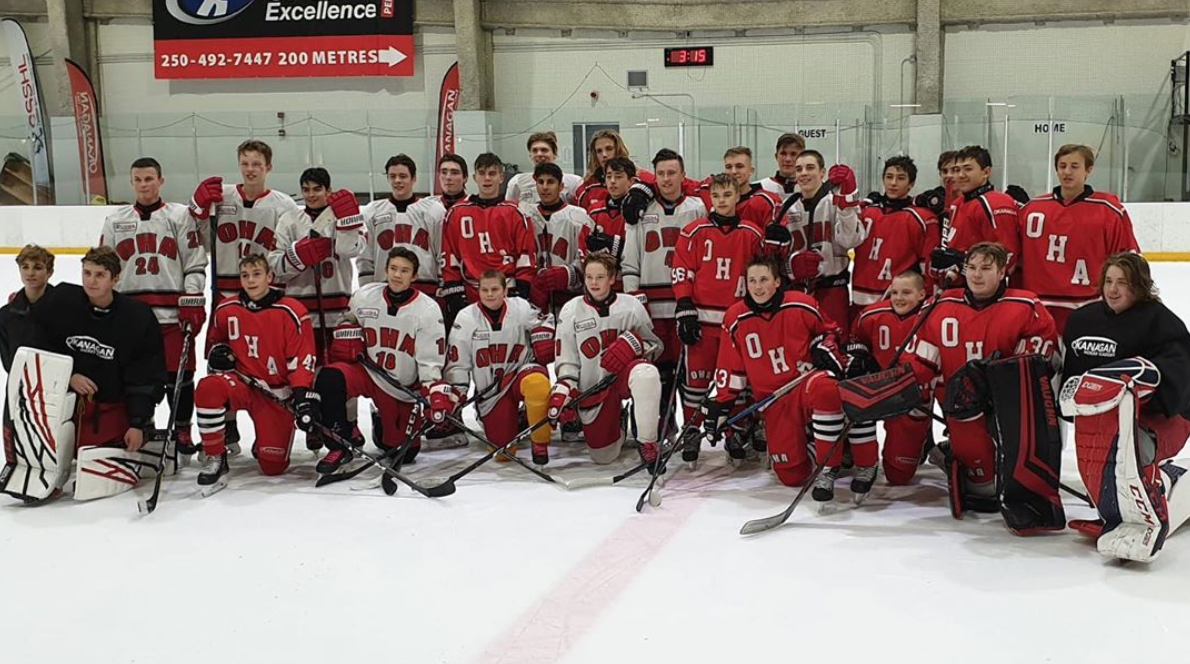 OHA UK got their game schedule in Penticton under way against The Penticton Vee’s T2 team.  The team spent the day resting and preparing for the Friday night match up after a full travel day the day before as they made their way out from the UK into Vancouver and onto Penticton and the base of OHA.

The team made a strong start and were the better team in the opening 10 minutes, looking hungry and eager to impress.  Jack Goodchild, Oli Endicott and Cain Russell carved out the first clear cut chance of the game only to see the Penticton Netminder produce a big stop.   Mil Moons starting in net for OHA UK was looking strong at the other end also keeping the game tied when called into action.  The UK boys were having to deal with the faster pace and more physical style, but were more than holding their own and the period ended still scoreless after 20 minutes.

The Second period saw Penticton start the strong and come out hard forcing OHA into early defensive scrambles and Mil Moons stopping to big shots from the point.  The host soon found the opener though as their pressure told.  But it took an unfortunate deflection off a defensive stick to shoot up high into the net and beat Mil Moons who had been solid so far.   OHA pushed back and created several good scoring chances on the Power-Play, as Jack Godchild saw two efforts saved as he cut in off the wall.  The UK team were more than holding their own and looking like leveling the game as the period came to an end, and 40 minutes of end to end hockey.

With the final period under way, OHA UK went looking for that first goal of the trip to level the game.  Leo Pennisi saw a good effort saved, and Aaron Moody came close driving for the rebound, but still the team trailed but the one goal.   Once again on the Power-Play was when the visitors looked most dangerous.  Good control from Joe Llewellyn and Bow Neely once again found Goodchild who forced another huge stop from the hosts.  The killer goal against came with 9 minutes remaining.  A defensive turnover allowed Penticton to work the puck to the point and a shot through traffic beat Mil moons to take the game to 2-0.   But the with time running into the final minutes, and the team going all out to pull the game back, Goodchild again found space at the back post and saw his shot beat the Netminder of the inside bar and out, only for the goal not to be awarded.  The game winding down to a 2-0 victory for the Penticton Hosts, but a solid performance from the UK academy.

Sunday saw the OHA UK team play their second game of the tour, against the Penticton OHA Midget Varsity team.   With the team settled and rested, they got off to a fast start and looked sharp in the early minutes.  Jack Goodchild forcing a great early save, and Oli Endicott coming close off the rebound.    The midget Varsity team opened the scoring however halfway through the first period, off a 3 on 2 rush, Mil Moons in net saved the initial effort but the rebound fell onto the driving forwards stick who slotted the rebound home.  The visitors responded well though and again looked dangerous in attack, and it was Jack Goodchild who leveled the game with OHA UK’s first goal of the trip.  A highlight reel end to end effort, bringing the puck from his end, before driving wide and finishing across the netminder.  And OHA UK took the lead before the break.  Again, on the man advantage looking dangerous, they worked the puck around well, before a point shot from Bow Neely gt redirected in front by Cain Russell for a 2-1 lead.

The second period saw the hosts come out the stronger and leveling the game with two minutes.  Again off a fast break the initial effort was saved, but they recovered the rebound and found an open player in front.  But two minutes later the UK team were back in front.  A great pass from Bow Neely found Jack Goodchild breaking through the middle who skated through on his own and finished calmly in on the Netminder.  Once again though the hosts leveled the score quickly.  Finding a shot from the top of the circles over Mil Moons Shoulder.  A very flowing period of hockey ending 3-3 with the visitors really playing so much improved hockey and matching their hosts for most parts.

Off the opening faceoff in the third period, Midget Varsity took no time to get going, scoring on their first attack to open a one goal lead.  With the visitors beginning to tire, the hosts took control of the third period.  And Midget Varsity took the first two goal lead of the game with only six minutes remaining only for the UK academy to pull right back 15 second later.  Bow Neely’s shot falling to Sam Bennett who slotted the rebound home on the backhand.  Okanagan UK went pushing to level the game but a breakdown and a late opportunity to their hosts cost them as they put the puck home to close out a hard fought 6-4 victory.