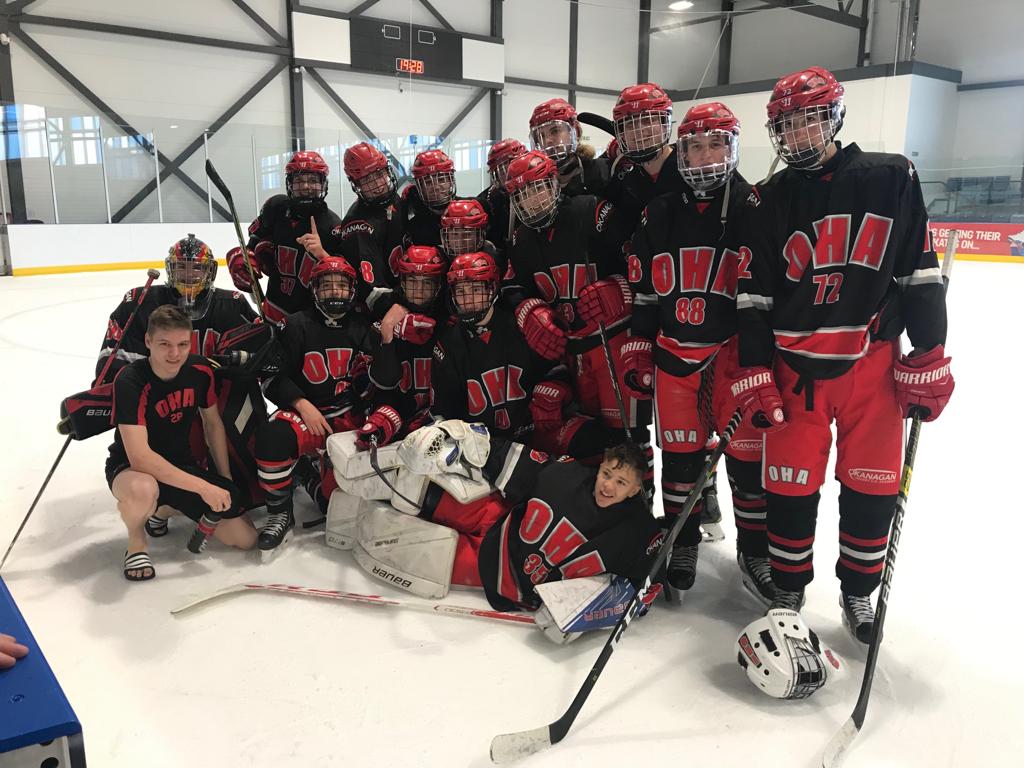 OHA UK Claimed the EIHA U18 Division 1 South title on 12th May, with an emphatic 18-1 score line over the Chelmsford U18s.   After a season battling with league rivals Swindon, it took right up to the final two weeks of the regular season for OHA to catch up and jump into first spot.  Finally taking the Championship with a game to spare.   A run of 12 games unbeaten from January onwards pushed OHA into Championship contention and set a platform that enabled the team to retain the trophy once again.

The game in Chelmsford saw the hosts battle hard and keep OHA off the scoreboard in the initial shifts even with great pressure from the Okanagan forwards.  Defenceman Sam Tacci got the team off the mark with a great point shot, beating the Chelmsford Netminder over his shoulder, after hard work from Sam Bennett working the puck from the boards to the point.  And it was the from defense again that OHA doubled their lead.  Jan Skorcik stepping in from the point to finish low and hard, after Jake Williams and Lucas Arto had worked the puck out into the slot for Defenseman to step into.  Jack Goodchild opened his account to take the lead to 3-0, on an evening that would see Goodchild go on to score five.  Soon after the OHA Powerplay looked sharp as Jake Williams combined once again with Lucas Arto, this time Arto stepping out and finishing himself for his second point of the match.  Reed Sayers and Jack Goodchild were playing well together and took the game all but of out of reach by the end of the first period, with Sayers scoring either side of Goodchild’s second.  End of the first period 7-0 to Okanagan.

The entire OHA bench were contributing well to the team performance, as defencemen Ross Thompson scored followed by Joe Llewellyn as Okanagen moved the puck around well.  Sam Bennett scored his third of the year before Reed Sayers completed a hat-trick. The OHA line of Jake Williams, Aaron Moody and Lucas Arto were really linking well, and combined in the third period for three straight markers, Jake Williams finishing on all three.  Final Score 18-1 to OHA UK.  And two points that would see the team finally able to celebrate the 2018-19 league title.  A fantastic achievement for this group of players.  Head Coach Ryan Aldridge said “We are obviously thrilled for this group of players to win the U18s League title.  They should be proud of what they have achieved and how far they have come this year as a group.  This by far has been the group that has come the furthest in terms of development from where they were at the start of the season. It’s been a real development year throughout the team. And now we turn our attention to the National Playoff Finals in Sheffield, and we are excited to see how we can match up against the best teams from the North as we go looking for the National Playoff title. It’s an exciting two weeks ahead now as we get prepared”

OHA UK completed their league schedule with a trip to Guildford last Saturday 18th May (match report to come soon).  Before heading to the Junior National Finals in Sheffield where they will face Telford U18s in the 2nd semi-final on Sunday 26th May at 8pm.